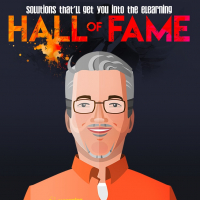 RichVass VP, Learning SolutionsAdministrator, Rockstar Manager Posts: 39 eLearning ROCKSTAR Admin Team
June 16, 2021 edited November 15, 2022 in eLearning Development
Benjamin Montag is a Lectora specialist at RegEd, a compliance management and services company. A former defense contractor with the Navy, Benjamin honed his skills in Computer-Aided Instruction over thirteen years and began using Lectora Online in 2017. Leveraging his Fine Arts Degree from the University of Pennsylvania, he has built his career in Learning Technology as an accomplished developer and graphic artist.

Lectora Online has been his tool of choice thanks to the tracking and collaboration features it provides. With manageable file sizes from published courses along with version controls and ease-of-editing JavaScript, it's been a go-to tool for him. "In my opinion, Lectora Online is far superior!" says Benjamin (he prefers LO over Lectora Desktop as well). RegEd primarily uses HTML outputs, and he has found the ability to configure and format bullets, line-spacing, text alignment, colored shapes, etc.very user-friendly in LO as compared to other tools on the market. Combined with the independent controls for building responsive solutions and the hierarchy mechanics in the Project Explorer, Benjamin and his team look no further than Lectora!