carlfink Community Member Posts: 1,099 ✭ Legend ✭
November 25, 2020 in Lectora Feature Requests
I suggested this to one of your developers at your show in 2016. He thought it was a good idea, or maybe he was just being polite, but nothing has changed since then.

See the attachment: that's the output from publishing one course. That's 13 pages of output, of which one line is meaningful. Why do you make the end-user scroll through all those hundreds of lines of output that we never, ever actually care about to see the one relevant line?

Note also: the only way to recognize the one line that has meaning is its color. I'm pretty sure you're now non-508-compliant, because something like 10% of people who have Y chromosomes (biomale) have some form of color blindness.

It gets worse: notice how long those lines are? You display them in a tiny dialog box like this: 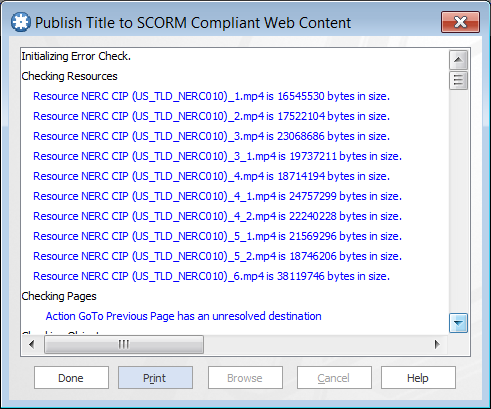 So the lines are not just meaningless, they're confusingly wrapped/cut off. To add insult to injury, you inexplicably prevent me from resizing the dialog to make it easier to read and faster to scroll through. Why?